Formula Electric Racing NUST (FERN) is a program by NUST university which comprises young students that work for upgrading and make NUST’s racing Electric Vehicle, the first in the world. FERN has been able to bring the multi-billion dollar Electric Vehicle manufacturing giant, Tesla Inc. as its innovative partner. Though FERN has secured many other international partners as well,  this is by far the biggest achievement of the program.

6 years ago, NUST’s five-person team of undergrad students made Pakistan’s first ever Formula Electric Car, making Pakistan one of the 6 countries to be a part of the Formula SAE Lincoln 2016 competition. 30 teams from 6 countries were able to qualify for the competition. FERN emerged as the only team representing not only Pakistan but entire Asia.

Taking a major stride forward, Formula Electric Racing NUST (FERN) from Pakistan Navy Engineering College (PNEC-NUST) has earned technical sponsorship by Tesla. One of the most valuable automotive brands that is accelerating the world’s transition to sustainable energy with electric cars, solar and integrated renewable energy solutions and so on.

Tesla awards this sponsorship to Formula Student teams from around the world. FERN is the first and only team from Pakistan to have been conferred this award. Apart from extending technical sponsorship, Tesla will also grant a discount of 5000 euros on enepaq tinybms, ADI & TI, bms chips and dev boards to FERN. FERN is a celebrated Formula Student team from Pakistan Navy Engineering College, one of the constituent colleges of NUST.

The team has been working in electric propulsion since 2016. It has had the unique honour of representing Pakistan in 5 Formula Student competitions and achieving the only podium finish for any Pakistani team. FERN is also the first team to work on Driverless Vehicles in Pakistan. The collaboration with Tesla will certainly benefit FERN in accomplishing bigger milestones in the global automotive market.

911 Helpline To Be Launched In Pakistan 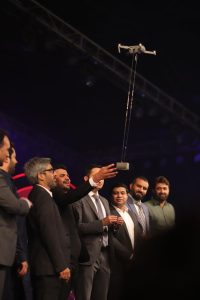