Earth reached to a new achievement as it’s population hits 8 billion and counting, the UN estimates on the basis of its best demographic projections suggest.

However, experts doubted the count as census data is not updated in various countries and UN has claimed November 15 as the “Day of Eight Billion”.

In a statement, UN Secretary-General Antonio Guterres stated that the milestone is an occasion to celebrate diversity and advancements while considering humanity’s shared responsibility for the planet.

Furthermore, UN declared that in around 12 years it would surge from 7 to 8 billion, and moreover forecasted that earth around 12,742 km will have 9 billion in the next 15 years.

According to the studies, the all over growth rate of the global population is sloping down comparing to the previous decade.

If we talk about countries, India is predicted to dethrone China and to be the most populated country in 2023, as per UN stated.

Whereas, Pakistan and other 7 countries including Egypt, Ethiopia, India, Nigeria, the Democratic Republic of Congo, the Philippines, and Tanzania would have more than half of the expected increase in world population in the next 30 years.

Hackers Can Now Spy On You Using Light Bulbs

Huawei Phones Around the World Are Going Out of Stock

Redmi to Take the Monitor Market by Storm on December 10 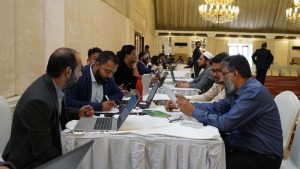